History of the Non-Catholic Cemetery for Foreigners in Rome

According to the ecclesiastical laws of the Catholic Church, Protestants can be buried neither in Catholic churches nor in consecrated ground. Nevertheless, burial places for non-Catholics came into use comparatively early in some much-visited Italian harbour cities, such as Livorno (from 1598) and Venice (from 1684). There are also non-Catholic cemeteries in Florence and Bagni di Lucca.

The Cemetery for non-Catholics in Rome dates back to at least 1716 when records show that members of the Stuart Court in exile from England were allowed by Pope Clement XI to be buried in front of the Pyramid. Other non-Catholics, many of them young people on the Grand Tour, were also allowed to be buried here. The land then and now is adjacent to two ancient monuments – the Pyramid of Caius Cestius dating to approximately 12 B.C. and the Aurelian city wall – that form an impressive backdrop for the Cemetery.

The expansion from 1716 until today 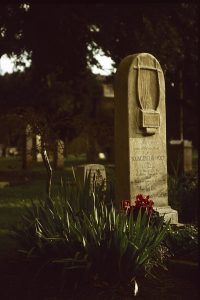 The earliest grave of which traces have been found is that of George Langton, an Oxford graduate, who died in 1738. His remains, covered by a lead shield, were found in 1929 during excavations. The first North American (eighteen year-old Ruth McEvers) was buried in 1803 and in the same year Baron Friedrich Wilhelm von Humboldt, Prussian minister resident in Rome, buried his nine-year-old son Wilhelm. Between 1738 and 1822 more than sixty people were buried in that area.

In 1821 the Pope forbade further burials in front of the Pyramid and granted instead an adjoining area of land which was surrounded with a wall (the “New Cemetery”). In 1824 the Holy See gave permission for a protective moat to be dug around the Old Cemetery.

The New Cemetery was twice enlarged during the 19th century. The second and last extension in 1894 gave it the dimensions and scale that it occupies today. A chapel was built in 1898.

In 1910 a formal agreement with the Mayor of Rome, Ernesto Nathan, defined the Cemetery as culturally important and thus to enjoy special protection. In 1918 it was declared a Zona Monumentale d’Interesse Nazionale.